Climate change and workplace health may seem to be separate issues. In practice they have overlapping priorities, interests and solutions that can be mutually beneficial. Jon Herbert reports. 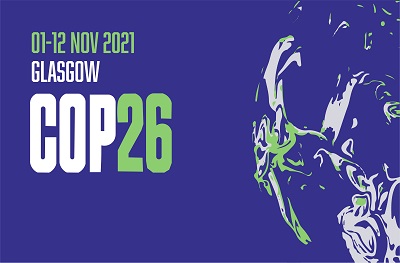 It has been hard to miss that ― in fits and starts — 196 nations are being urged to come together virtually or in person for Glasgow’s make-or-break COP26 global climate summit in November.

There they will be under tremendous pressure to agree drastic measures with the main aim of preventing the world getting even warmer.

What may be less clear is that reducing the emission of greenhouse gases (GHGs), and carbon in particular, also has important health benefits. And these, fortunately, reflect the wider agendas and responsibilities of increasingly aware local communities, businesses, organisations and society.

One very current example is air quality. Minimising GHGs and industrial emissions will help to protect the environment from serious damage while also reducing problems that affect the immediate health of millions of people.

New research work is now systematically measuring and tracking causes and impacts, and how much healthier our lives could be if green commitments made by the world in the 2015 Paris environmental agreement (COP21) are put into practice following a successful COP26.

World on a knife-edge

One organisation working to ensure that health is at the centre of how governments understand and respond to climate change is Lancet Countdown, a group of 35 global leading academic centres led by UCL with UN agencies.

In its 2020 report Tracking the Connections between Public Health and Climate Change, it considers five key domains and over 40 indicators.

The report points outs how Covid-19 and climate change are converging crises. Climate change and infectious diseases share common drivers. It believes that if the world can act in unison, the results could be “cleaner air, healthier diets and safer places to live”.

It sees triple benefits and opportunities in aligning the pandemic recovery with climate change challenges to protect health, promote sustainability, and safeguard the planet from irreversible environmental damage.

In the article “Health Consequences of Climate Change Interventions” (The Lancet, 29 October 2015) Anthony Robbins also argues that “tackling climate change could be the greatest global health opportunity of the 21st century”. There is evidence that when health is mentioned, support for strong government action grows.

It supposes a world in 2040 where temperature rises have a 66% probability of not exceeding 1.8°C, and historic CO2 emissions are not actively removed from the atmosphere. The study then took nine major global and regional locations and modelled health gains they should be able to see as a result of climate policies that meet Paris Agreement principles — with millions of lives saved annually.

According to its authors, Alice McGushin and Dr Harry Kennard, the study identified many ways in which environmental interventions to tackle climate change can also improve health. It looked specifically at three.

Air that we breathe

Estimates from the World Health Organization (WHO) of the fatal effects of poor indoor and outdoor air quality show that some seven million people may die from air pollution worldwide every year.

WHO also calculates that 99% of people breathe in air that exceeds its guideline pollution limits. It is thought that PM2.5 fine particulate matter from fossil fuels could actually be putting 8.7 million people at higher risk of death.

In addition, WHO expects climate change between 2030 and 2050 to cause approximately 250,000 additional deaths annually from malnutrition, malaria, diarrhoea and heat stress.

Food that we eat

Food produces a double environment and health whammy. According to the Intergovernmental Panel on Climate Change (IPCC), between a fifth and one third of total GHGs released to the atmosphere are now thought to be associated with food production.

At the same time, dietary factors such as a salt intake, combined with low fruit and wholegrain consumption, are estimated to be responsible for some 11 million deaths annually.

Reducing a dependency on livestock and increasing the consumption of fruit and vegetables, legumes and nuts could decrease agricultural emissions and improve health.

Steps that we take

Physical activity is known to reduce risks of both death and disease. Yet more than 33% of adults in high-income countries are known not to meet recommended physical activity levels.

More walking and cycling for short journeys would both help to cut carbon and particulates emitted by road vehicles and encourage more robust health.

The nine are Brazil, China, Germany, India, Indonesia, Nigeria, South Africa, the UK and USA. These countries represent more than 70% of global emissions and are home to 50% of the world’s population.

The scenario represents “a balance between anthropogenic emissions by sources (human activities) and removals by sinks (natural or artificial)”. In other words, net-zero emissions in the second half of this century. Diet and active travel were also part of the equation.

The modelling showed that if these countries are able to meet the conditions set out in the Paris Agreement by 2040, there could be an annual reduction of 1.18 million deaths linked to air quality, 5.86 million from diet-related factors, plus 1.15 million fewer fatalities brought on by physical inactivity.

The greatest gains would be from diet changes; Indonesia would benefit most from reduced air pollution, Germany from better diet, and the US from more active travel.

The ideal model would be for one key objective of decarbonisation to be positive health outcomes.

Going beyond the aims of Paris with more effective air pollution controls, more flexitarian and plant-based diets, plus more walking and cycling by 75% of the population under the age of 85, is estimated to see a further reduction of 1.64 million in air-related fatalities, 6.43 million fewer diet-related deaths, and a 2.08 million fall in deaths due to reduced physical activity.

To meet these goals, considerable changes will need to be made to the provision of sustainable and pleasant open urban areas, high-quality walking routes, and convenient, reasonably priced, accessible public transport.

At present, urban community areas tend to be isolated and hard-to-reach; meanwhile, many rural spaces are very car-dependent.

This ties in with general and personal targets many people are already signing up to for cultural, practical and environmental reasons, often encouraged by company policies designed to safeguard the health of their employees.