Roland Finch points out that current events offer a rare opportunity to take the best experiences in construction and consign the bad practice to history. 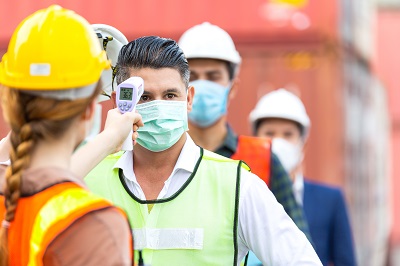 It is strange to think that at the beginning of 2020, the UK construction industry, already recovering from the fallout from the sad demise of Carillion and the tragic events at Grenfell Tower, was primarily focused on two main issues that dominated all the headlines. The first was Brexit, and what was going to happen with regard to supply chains, procurement, standards and all those things that were previously governed by European directives.

The second was the impact of flooding. Between November 2019 and the end of February 2020, sustained bouts of heavy rainfall led to widespread flooding in many parts of the UK. There was even a tornado reported in Surrey just before Christmas.

It culminated in February 2020 with the arrival of Storm Ciara and Storm Dennis, which caused severe disruption throughout the country, and led to the mobilisation of the armed forces and the provision of emergency financial assistance under the Bellwin Scheme (the Government scheme that reimburses local authorities for costs resulting from disasters or emergencies).

At the time, we were aware of the outbreak of a mysterious virus in the Far East, but almost nobody, apart from a handful of people, predicted the devastating consequences that caused the country effectively to shut down in late March.

The UK construction industry is nothing if not resilient. It should be recognised that its best side was shown when all sides pulled together to deliver several Nightingale field hospitals across the country in record time, and the Government issued advice to its “client” departments asking them to consider on-account payments, or full valuation of work completed, to assist with supply chain cash flow.

However, there were also many articles in the trade press and comments on social media describing the steps to be taken to protect each party’s own interest, whether by suspending work, terminating contracts or renegotiating contract terms for their own benefit.

Which begs the question: What will happen once things get up and running again — which version of the industry will prevail? And what will the “new normal” be like in our sector?

It is fair to say that despite repeated campaigns by the Health and Safety Executive (HSE) and others, health and safety hasn’t always been top of the agenda but the pandemic has brought it into sharp focus with the concepts of self-isolation and social distancing. However, new site operating procedures and the redesign of activities to avoid personal contact has cast new light on the way that things are actually done on a building site. This has resulted in a review of practices and procedures, coupled with better workforce engagement and awareness, which should ensure that work will be done more safely in the future.

In addition, there has been a renewed emphasis on the effects on mental health that the situation places on individuals both as a result of fear of the virus and the consequential changes to working environments, family and social life.

Several organisations have already publicly stated that they intend to take the best of the innovations, and incorporate them into their future plans. One result is the increased use of technology, resulting in more remote working, video conferencing, online checking and review, off-site construction and use of tools like BIM. Many of these changes will be widespread and permanent.

Planning has improved quite a bit in recent years, partly as a result of legislation such as the Construction (Design and Management) Regulations 2015 (CDM) but also because organisations have recognised the commercial benefits. However, the enforced review of activities and sequencing that has come about because of the coronavirus outbreak will mean that a lot more effort and consideration will go into planning projects, rather than simply arriving on site and dealing with issues as they arise. As noted earlier, the advent of BIM and the opportunity to use software applications to model and simulate processes as well as facilitating off-site production has already initiated a sea-change in the industry.

Forecasting is based on previous experience, and to some extent the circumstances brought about by the pandemic are unprecedented, so the future will be less certain but this may also mean that forecasts are more conservative, and that dates are met with time to spare rather than setting unachievable targets and missing them.

The industry has been talking about collaboration for years. There have been some notable successes but also some spectacular failures.

However, for the first time, the phrase ‘”we are all in this together” has some resonance. Coronavirus is not selective; it can’t be affected by good lawyers or a dominant trading position. It is a potential threat to everyone and is beyond the control of all parties.

All sides agree that the best way to resolve the situation is to act with a common purpose. It is to be hoped, therefore, that this new spirit of co-operation will extend well beyond the immediate aftermath of the outbreak.

Perhaps one way to do this is to include the construction team earlier in the design process and make use of their expertise, to undertake to include all the information necessary to construct, and not to call the lawyers in as soon as there is a glitch onsite. Even if there is disagreement, let us see if we can use our new-found community spirit to resolve it before it escalates into something more serious.

Not everyone agrees with the UK Government’s response to the pandemic but, ultimately, two of the phases — research and mitigate — have some application here. Hopefully some of the issues that typically end in disputes can be resolved without the need for expensive third-party resolution.

One of the key ongoing issues within the industry has been payment procedures: amounts, timing and speed. Groups within the industry have been trying for a considerable time to have these reformed. There has been talk of retention bonds, payment timescales and proper accurate valuation of work. But the fact remains that it is now 25 years since the Housing Grants, Construction and Regeneration Act 1996 began its journey onto the statute book, and the effect on payment has been, at best, mixed.

The supply chain still complains of extended payment cycles and target payment dates not being met, as well as security of income in the form of project bank accounts. Meanwhile there are constant calls for reform of the retention regime, which many see as outdated and impractical in an age where bank transfers are near instantaneous. Perhaps now is the time to look at the procedures and ensure that the whole project financing system is properly reviewed.

Even with the best intentions, procurement remains an issue for many within the industry. Tendering procedures are overly complicated, and the focus inclines towards the lowest price. While cost still has a role to play, in situations where the work is properly designed and specified and where the variables are known and understood, the fact remains that a culture of risk avoidance persists. And practices such as underpricing to win work, cover pricing so as not to lose clients, or “Dutch” auctions with subcontractors are still commonplace in some areas.

We have an opportunity to look objectively at the way in which the industry is structured, and perhaps finally achieve something which has so far been beyond us — to ensure that the risk is properly allocated to the party best placed to deal with it.

The 2020 novel coronavirus outbreak does give us the opportunity to fundamentally review the industry acknowledged to be central to the nation’s economy.

Its spectacularly complicated projects, design and innovation as well as proven flexibility all build confidence in the sector’s ability to regenerate itself, taking the lessons it has learned and using them to make the new normal a bright one.

We all know what the problems are, we just need the resolve to change them. What better time than now?