Sandra Strong looks at changes made to the US International Traffic in Arms Regulations.

It may come as a surprise to some readers to learn that the USA controls certain goods, technology and software even after they have left the USA or when they have been manufactured outside of the USA. This is known as extra-territoriality controls. The main US regulations relating to extra-territoriality are on Strategic Goods listed in the International Traffic in Arms Regulations (ITAR) and, to a lesser extent, the Export Administration Regulations (EAR).

ITAR restrictions relate not only to where the USA will permit UK businesses to export, re-export or transfer, within the UK, goods, software and technology specifically designed in the USA for military use, but also include some stringent nationality controls. ITAR treated all items the same, resulting in the same controls being applied to both an F-18 and just a bolt that is used on that F-18. These restrictions have led to non-US companies designing out US technology and goods in projects and finished items wherever possible to ensure they are not constrained by US extra-territoriality.

At the start of his first term of office, President Obama declared that he would review ITAR and the negative impact it was having on US companies when they were attempting to sell their goods and technologies overseas. His second term of office has seen new rules being implemented in an attempt to reduce the impact on overseas trading partners, while still giving the USA the powers to control strategic goods and technology..

The first tranche of the Export Control Reform (ECR) became effective on 15 October 2013, and more are planned for 2014 (see the table below). The keystone of these reform efforts is to transfer jurisdiction of less sensitive military items currently controlled under the ITAR administered by the Department of State (DoS) to the more flexible Export Administration Regulations (EAR) administered by the Department of Commerce (DoC). But let us be very clear on a couple of things — ITAR is not changing, it will just cover a smaller number of goods and related software/technology, while goods moving from ITAR control will still be controlled, but under the jurisdiction of the DoC.

The USA ECR Export is not going to simplify exports or export controls, so the transition period is likely to be difficult for affected companies. It was meant to streamline the controls into a best practice model — a race horse one could say. What we have is a camel, you can still race it but it is not quite as elegant. We may have less licensing but it does not reduce control or administration. In fact, this may increase.

The most important changes are the transitioning of less sensitive items from the US Munitions List (USML) to the Commerce Control List (CCL) on a rolling, category-by-category basis. The aim is for the USML to become a positive inclusive list of sensitive military items that continue to require strict control. For example, fighter and bomber aircraft, and specialised military components such as air-to-air refuelling, tail hooks, bomb racks, and related services and technical data will continue to be controlled under USML Category VIII.

Goods and related technology previously captured under ITAR will move onto the Export Administration Regulations (EAR), either under a new Wassenaar Arrangement Munitions List (WAML) code of 600, under Anti-Terrorism risk control (EAR 900 Series) or to EAR99 (only restricted to US embargoed and sanctioned countries). For example, military cargo and trainer aircraft, as well as many specially designed parts and components for these aircraft and USML aircraft, will now be classified under one of the subcategories of ECCN 6A610. Most fasteners (eg nuts and bolts) will be decontrolled even if specially designed for a particular military application. Certain military gas turbine engines and specially designed parts will fall under ECCN 6A619.

It is important to remember that these changes are in the US regulations and do not apply to UK/EU Military Controls. This means we may have the same products and technology controlled as Military on export from the UK but under EAR from the USA.

Not all companies will benefit from this move from State to Commerce. This includes EU companies:

Stock held at the time of transition supplied under ITAR controls will remain under this jurisdiction unless a formal transfer of jurisdiction is applied for. Moving from ITAR to EAR means that goods and related technology will have some useful simplifications.

An EAR Licence Exception being cited as a panacea to extra-territoriality controls is the Strategic Trade Authorisation (STA) but, as well as requiring a statement by the consignee to comply with the Exception Ts&Cs and agree to US Government Audits it also means de minimis will not be permitted but is only valid if the consignee has previously been licensed by the either the Department of State or Commerce. These conditions apply to internal transfer of EAR goods, ie from one UK importer to another UK business.

The new style of US export controls will Catch and Hold goods within one of the three areas of regulations or potentially Catch and Release to see they are caught under the next level of control. The ECR creates new common definitions with regard to “specially designed” to make determining jurisdiction of an item easier (see below). 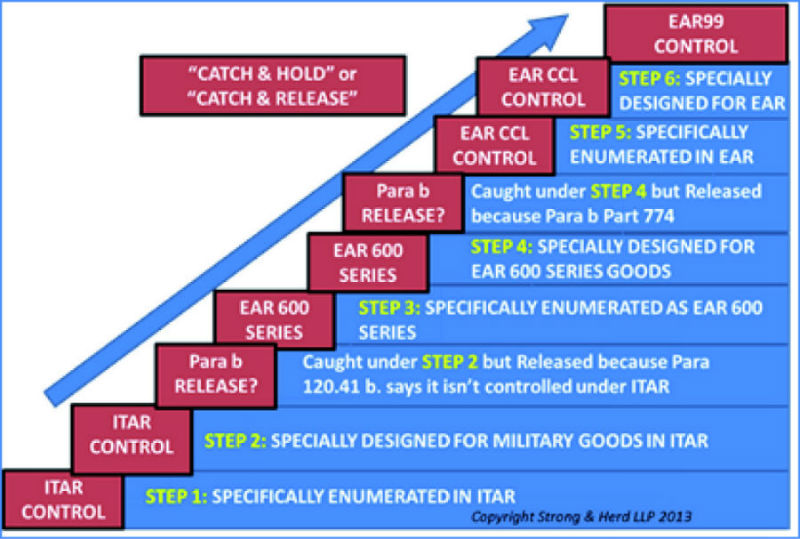 The Department of Commerce has developed an online tool, the Specially Designed Decision Tool on the Bureau of Industry and Security website, to assist businesses in identifying where their products and related technology are now controlled.

It will take time to get used to these new US controls and there are already cries of “Let’s just get back to ITAR!” but the aim is to rationalise the products subject to strict US controls so they can be better controlled and open up market opportunities in other areas. Only time will tell how effective and efficient the ECR will be.