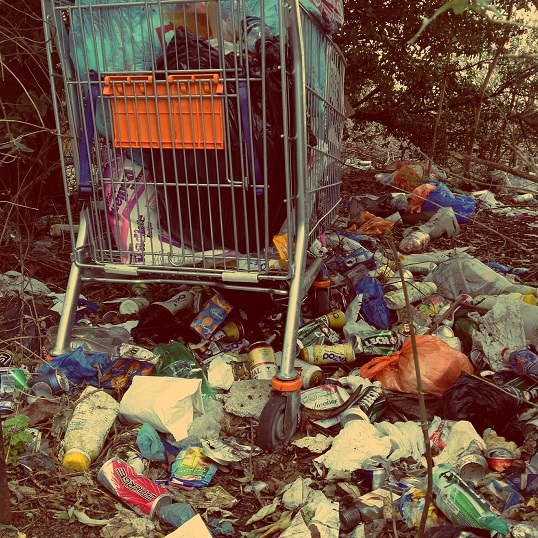 Martin McDonagh, 26, had been described as “Plymouth’s worst fly-tipper” by the press for dumping rubbish collected from people’s homes in the countryside.

McDonagh would knock on people’s doors and offer to take their rubbish to the tip for cash. However, the rubbish did not go to the tip but was dumped instead by McDonagh in the countryside.

On one occasion, McDonagh was seen transferring concrete rubble from one van to another in Teignmouth. The latter was abandoned, and asbestos discovered inside. The van was later destroyed.

McDonagh pleaded guilty to fly-tipping at 18 different locations over a 12-month period. However, nine days before he was due in court for sentencing in February 2017, he caught a ferry to Ireland.

McDonagh was sentenced in his absence to 20 months in prison.

McDonagh was told he would begin serving his 20 months’ sentence (passed in absentia) along with an additional six weeks in prison for failing to surrender to custody. His Honour Judge James Townsend also issued McDonagh with an indefinite criminal behaviour order.

McDonagh’s extradition from the Republic of Ireland was the result of close partnership working between the Environment Agency, Devon and Cornwall Police and the National Crime Agency.

Adrian Evans of the Environment Agency said: “We have been determined to catch him to show there is severe punishment for fly-tipping and no escaping it. Any short-term financial reward is dwarfed by the penalty when you get caught.”

Although organisations would never knowingly be involved in fly-tipping, this case does remind less careful businesses that fly-tipping — or giving their waste to others who then fly-tip it — is not the low risk activity they might imagine.

Indeed, in this case, even though the convicted individual, McDonagh, fled English jurisdiction, the law enforcement and prosecuting authorities went to some lengths to have him extradited back to serve his sentence after almost three years.

More pertinently, this case also reminds every business and individual of the need to check the credentials of contractors to whom they entrust waste consignments.

In a business setting, this means organisations need to understand the number of parties involved in the chain of custody of their waste up until final disposal, be this recycling or landfill. Sometimes a number of contractors could be involved with broking, storing, consolidating or simply moving the waste to different points through its journey to the final destination. All these parties need to appropriately licensed by the Environment Agency (in England and Wales) or the Scottish Environment Protection Agency (in Scotland).

Cutting corners is simply not an option with waste disposal, bearing in mind that, in a business setting, the producer of waste is almost always has a strict legal responsibility, until the final disposal is completed, for their every waste consignment. This means that the organisation bears the burden of any penalties if the waste is mishandled, even if the organisation was not negligent or even aware of the situation.

In practice, managing such risks should mean only ever using reputable parties — be it local authority trade waste (where available), nationally known contractors or other trusted partners whose appropriate licensing and other credentials have been checked.

These parties should be able to deliver a safe, appropriate and legal disposal of waste. However, the producer of the waste should still monitor their waste contractor(s) performance, just like any other contractor they might employ. Out of sight, out of mind is not a safe option when thinking about waste.

So, almost without exception, cold calling by those purporting to be waste contractors or those conducting other businesses who say they can also manage your waste should be avoided unless their bona fides as a waste contractor can be properly verified, through the Environment Agency website or other trusted sources. Parties who claim they can offer cut price and/or simplified methods to manage waste consignments should always be thoroughly checked out.

To achieve this on an ongoing basis, businesses need to understand their waste streams and the hierarchy of waste, especially where there may be hazardous waste, such as asbestos, within a consignment. Businesses should always talk to their waste contractors if they are not sure what can and can’t be put into particular waste stream or take other specialist advice if needs be.