The latest addition to the sustainability policy is measuring the biodiversity value of the land around headquarters, offices or distribution centres land, and setting up strategy to ensure a demonstratable biodiversity uplift of existing green space. Max Starr explains how to implement this into your sustainability plan. 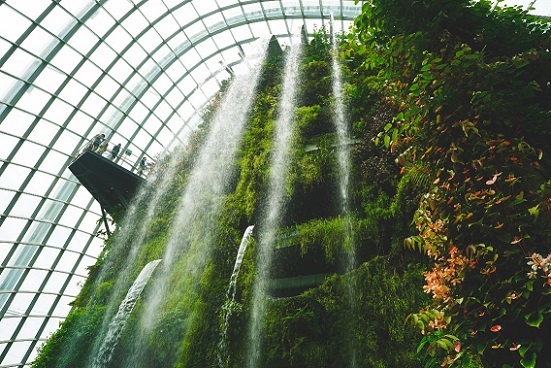 The principles behind measuring biodiversity value of business land focuses on drawing up a measurement of the current biodiversity value that the land serves, identifying areas for improvement, and then implementing a plan for demonstratable biodiversity uplift. What was considered an ecological concept is now being integrated into commercial land use strategy. Can measuring your lands biodiversity fit into your sustainability commitment?

Counting or measuring biodiversity certainly isn’t a new concept, however, newer methods of habitat creation and maintenance on commercial land are being adapted, curbing habitat damaging practices and embracing local wildlife regeneration. Following a recent study that was published on the eve of the COP15 UN Biodiversity Conference, it was acknowledged that the UK had lost nearly 53% of biodiversity since the industrial revolution. This sobering figure has driven many firms to act on their own lands, contributing to national biodiversity recovery and the mitigation of climate change, deforestation and pollution.

When the Environmental Act 2021 achieved royal assent on 9 November 2021, Biodiversity Net Gain (BNG) for new developments was legislated to be a mandatory requirement. As part of the Governments ambitious objectives laid out initially in the Environmental Bill 2021, Part 6 of the Act goes into the BNG and conservation aspects of the Act which must now be included into any new development.

Focusing in on the BNG requirement of the Act, new developments must provide a 10% BNG uplift to the existing developments baseline BNG value, a value that is measured using Natural England's Biodiversity Metric 3.0. To produce a baseline BNG value, an ecologist attends the site, undertakes a habitat assessment survey for the current habitat condition and then submits a report to a local planning authority describing results and potential for BNG uplift including a biodiversity metric value for before and after proposed biodiversity enhancements.

This planning condition and value can be adapted into a proactive method of biodiversity uplift that can be implemented onto any land management strategy. Where a business is willing to review current land use procedures and set out objectives to improve biodiversity on their sites, the Biodiversity Metric is an ideal starting point to show the measured BNG baseline figure, and then build on this as the cornerstone of improvement targets.

The basics around biodiversity enhancement of a site using a BNG baseline value begins with an ecological survey of the land, thereby creating the same metric value that could be used in development planning instances (and can indeed be submitted for future reference). Following this metric value, consultation can then be provided for biodiversity enhancements and land management/use recommendations that will increase the BNG Metric value. Once recommendations have been made, a strategy to implement the enhancements should be put into place to ensure longevity of the biodiversity uplift.

The key to enacting biodiversity uplift is through land management and maintenance practices which generally fall under the jurisdiction of facility management, whether that be in house or outsourced. It is through careful and considerate stewardship of green spaces that will bring about successful biodiversity improvements.

While Government intentions have been informed through the 25 Year Environment Plan and the Environmental Bill 2020, mandated improvements set out for biodiversity enhancement are only applicable to new developments and not for existing green space. If meaningful results in UK biodiversity recovery are to hold and make up for the current levels of biodiversity loss, it may be that landowners must act independently and swiftly.

By investing in improved green infrastructure and biodiversity, your business demonstrates meaningful environmental intent and devotion to employee’s wellbeing. Creating and promoting greenspace has been shown to:

Additionally, all these sustainability positive and beneficial initiatives can be showcased as social media content providing major marketing and PR impacts, highlighting your commitments to existing environmental pledges.