The climate is changing. If global emissions are not reduced, temperatures will rise and changes in weather patterns will lead to more extreme weather events such as flooding and heatwaves. Is your building climate change adapted? Laura King looks at some of the threats and solutions. 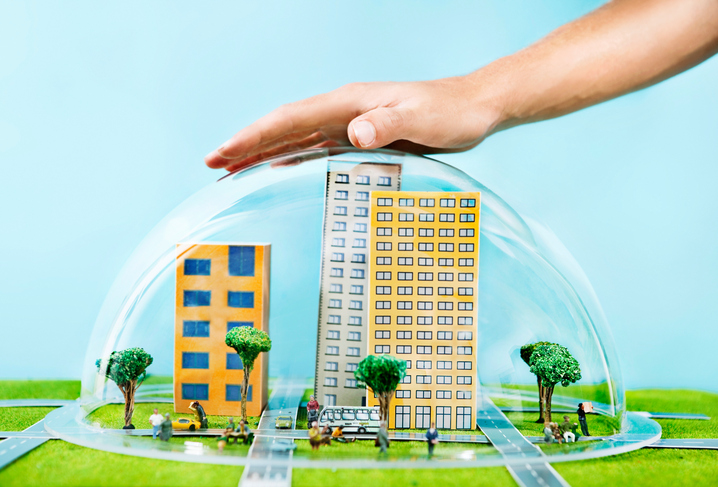 As a physical force, extreme weather events take their toll on buildings and their occupants; the floods over the last few years have certainly provided ample food for thought in this regard. However, it can be quite hard to put in place measures to help a building be resilient to extreme weather when it is a grey spring morning and the building has never had to withstand a flooding event. Too often the risk seems minimal and the reward too small.

However, these threats are very real and are likely to get increasingly commonplace — even in areas that have not suffered previously. With a lifespan of decades, there will be an impact on buildings and so it is prudent to start looking at options now, rather than fire fighting later. A good way of doing this is to incorporate building resilience into the current maintenance and improvement regimes. For example, consider any quick and cheap wins in the short term, but try to ensure that climate change and building adaptation are considered whenever looking at a major refurbishments, equipment upgrades or office moves.

The cost of flooding to businesses has been well-documented over the last few years following the flooding that hit many towns and cities across the UK. Despite efforts to improve flood management, this risk is not going to go away and is expected to get worse. A 2016 report from the Committee on Climate Change (CCC) estimates that the annual damage of flooding to non-residential buildings is expected to rise to £1 billion by the 2050s compared to £800 million today. This figure is even higher when considering the indirect costs such as the impact on trade, staff absenteeism and increased costs for insurance.

Following the floods of 2015/16, a comprehensive guide to how businesses can improve their resilience to flooding was launched in January 2017. It includes advice on how to flood-proof a building, including steps such as:

The guide, A Business Guide to Flood Resilience, is available at www.knowyourfloodrisk.co.uk.

The Centre4Resilience also outlines several measures that can be adopted to protect a building against flooding. Measures are generally divided into flood resistance measures (ie measures to defend the property, such as ensuring drainage systems are working well) and flood resilience measures which make the building easier to reinstate after a flood.

Heatwaves can have a sizeable impact on businesses, predominantly as a result of lower productivity. The losses are substantial. The 2003 heatwave in the UK is thought to have resulted in a loss of manufacturing output of £400–£500 million; estimates for the whole UK economy were much higher at £280 million a day.

These predictions have been backed up by studies around the world. For example, research into the impact of heatwaves in Australia — a country which is much more adapted to higher temperatures than the UK — estimated that high temperatures cost the economy at least US$6.2 billion a year. The lowered productivity was due to workers suffering from heat stress, a need for more breaks, fatigue, poor concentration levels and a lack of sleep.

Making buildings comfortable for occupants during heatwaves will be fundamental to maintaining levels of productivity. Although this will be a challenge for buildings in the UK that have historically been designed to have a low-energy consumption while ensuring comfort in the cold, it is a challenge that should be taken seriously with the temperature of future heatwaves expected to reach 48˚C in London and in the high 30s elsewhere.

Most buildings in the UK are not going to be immune to such high temperatures. Older buildings that rely on passive ventilation for cooling (eg opening a window when it is hot) are unlikely to be effective when outdoor temperatures are higher than desirable for working. Buildings that rely on mechanical ventilation, heating and cooling are not immune either as these systems will suffer from higher operation and maintenance costs.

Some of the areas to look at include the following.

Demand for water is expected to exceed supply in many parts of the UK by 2050 due to hotter temperatures, longer periods of drought and population growth. A report from Water UK suggested that if the most severe water restrictions were applied to businesses and the public sector, economic losses would amount to £1.3 billion a day across England and Wales.

The most affected industries will be intensive users of water. However, it is important to consider how water scarcity might affect a building and its users, for example through higher costs or the impact of bans on certain uses of water.

Saving water follows similar principles to saving energy — avoid, reduce, reuse. To begin with, it is important to understand how water is used in a building by conducting a water survey and collecting water consumption data. Ways of avoiding water use can then be identified — these might be as simple as ensuring good maintenance and providing better training and instruction on good practice. The second step is to identify areas where water use can be reduced, for example by retrofitting water-efficient technology. Finally, water reuse schemes like rainwater harvesting and greywater recycling can be considered.

Waste and Resources Action Programme (WRAP) produces guidance on how to support businesses in reducing water consumption. A good place to start is its publication, The Rippleffect — Water Efficiency for Businesses.

Other aspects to consider

It is important to remember that a building should not be treated as an island, and that resilience to climate change has many facets — for example, disaster recovery is also linked to communities, trade and infrastructure. Taking a facilities systems perspective on getting a building back up and running is important but it needs to be incorporated into a wider risk management and disaster recovery plan. Crucially, to allow full adaptation to the threats posed by climate change, these plans should not just reflect what has been seen in the past, they also need to take a long-term view of what might happen in the future.