Why is it so important that practitioners know how babies’ brains develop? Liz Hodgman explains.

It is common practice for provisions to put their most junior or inexperienced and/or unqualified members of staff into the baby room, utilising their more experienced and qualified staff to work with the older children, especially those nearing school age.

However, an understanding of how babies’ brains develop and the impact of practitioners on a baby’s learning and development, alongside research such as the Baby Room Project (PDF), highlight the importance of these practitioners being highly skilled and supported.

The introduction of the Birth to Three Matters Framework (PDF) in 2002, now part of the Early Years Foundation Stage, recognised the importance for practitioners to be skilled and experienced when working with babies and young children.

As far back as 1995, programmes were being developed to support practitioners and parents in developing skills for engaging with babies and young children, such as the Parents Early Education Partnership (PEEP). All practitioners should have an understanding of how babies’ brains develop. This knowledge will have a huge impact on their practice and will help them to realise the difference they can make to a child’s learning and development.

Research has shown that the first three years of a baby’s life are critical to his or her brain development, as this is a period of incredible growth. By the time a child is three, his or her brain will be about 80% of its adult size. It is therefore vital that this time is spent in an environment that provides for all the child’s basic needs, including stimulation to develop and grow, and that the child is supported by high-quality practitioners.

How do babies’ brains develop?

In August 2014, new research was published on the development of babies’ brains. The scanning of brains in the study shows that the brain at birth is about one third of the size of an adult brain and, over the first three months, grows rapidly to about half the adult size.

Many biologists and neurologists believe that babies would stay longer in the womb, but need to be born earlier, around 40 weeks, with smaller brains in order to move down through their mother’s pelvis. Some paediatricians believe that the first three months of a baby’s life are like the fourth trimester of the pregnancy, as the baby is so needy and lacking in social skills.

At birth, a baby’s brain will have all its neurons (cells that process and transmit information) and will be developing synapses. These are connectors between the neurons that transmit the information.

Synapses are formed at a faster rate during the first three years than at any other time in a human’s life. It is estimated that there are 15,000 synapses per neuron at age three, compared to 2500 at birth. The brain actually creates many more than it needs; at age two or three, the brain has up to twice as many synapses as it will have in adulthood.

These surplus connections are gradually eliminated throughout childhood and adolescence, a process sometimes referred to as blooming and pruning.

From Dekaban AS and Sadowsky D, “Changes in brain weights during the span of human life: relation of brain weights to body heights and body weights”, Ann. Neurology, 4:345-356, 1978

For example, if a child hears speech sounds, this will stimulate activity in the area of the brain that focuses on language. If the level of speech heard increases, so will the activation between the synapses and neurons, and repeated use strengthens synapses.

If synapses are rarely used, they stay weak and are more likely to be eliminated during the pruning process. Stronger synapses support the efficiency of the brain, supporting learning, memory and other cognitive skills.

Therefore, a child’s experiences have a great influence on how a child’s brain will process information for the rest of his or her life. This is why the first years of a baby’s life are critical.

There is no doubt that the influence of the environment and experiences of a baby and young child has a huge impact on the development of the brain, but this can be both positive and negative. For babies that experience very low levels of stimulation, trauma, violence or neglect, the negative impact on their brain development can be significant. 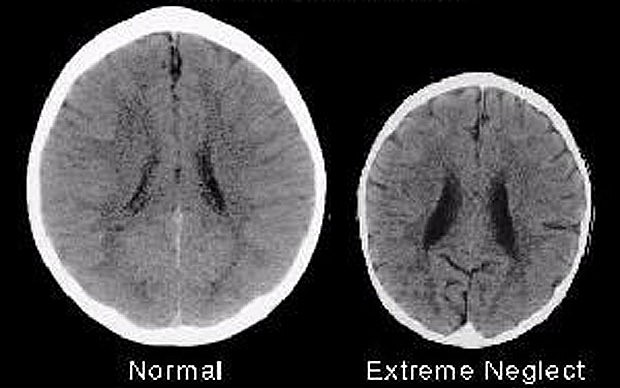 This image, from research conducted by Dr Bruce D Perry, Ph.D (PDF), illustrates the negative impact of neglect on the developing brain.

The CT scan on the left is from a healthy three-year-old with an average head size. The image on the right is from a three-year-old child suffering from severe sensory-deprivation neglect. This child’s brain is significantly smaller and has an abnormal development of cortex.

Dr Perry’s research showed that, when a baby experiences severe trauma, the mid-brain part of the brain overdevelops. This results in children having overdeveloped safety and stress responses, resulting in them acting more impulsively.

When children experience neglect, the thinking/feeling parts of their brain do not develop. This results in an underdevelopment of the higher reasoning part of the brain.

If children experience both trauma and neglect, then this can result in anxiety, impulsive behaviour, poor affect regulation and motor hyperactivity, with poor empathy and problem-solving skills.

Lack of a strong attachment in the first year can have a negative impact on a baby’s brain development. The Still Face Experiment was first presented in 1975 by Edward Tronick; since then it has become a heavily researched experiment to help researchers and scientists further understand how a child’s brain develops bonds of attachment and the impact of low interaction. It provides a powerful tool to demonstrate the importance of social interaction with children and is often used in speech and language training.

The negative impact of the environment and experiences within the first three years can result in a higher risk of the person developing depression in adulthood, dissociative disorders and memory impairments. There have also been links made to panic disorder, post-traumatic stress disorder, and attention deficit and hyperactivity disorder.

How can a practitioner support brain development?

A practitioner needs to provide:

Practitioners must work in partnership with parents to support their baby’s learning and development, and provide:

Managers of provisions may need to rethink their staffing strategy to ensure that baby rooms are led by very experienced staff members. Baby room staff need to undergo regular training to ensure that they are able to provide the quality input that babies need to support their brain development.