John Barwise assesses the latest evidence and what action needs to be taken. 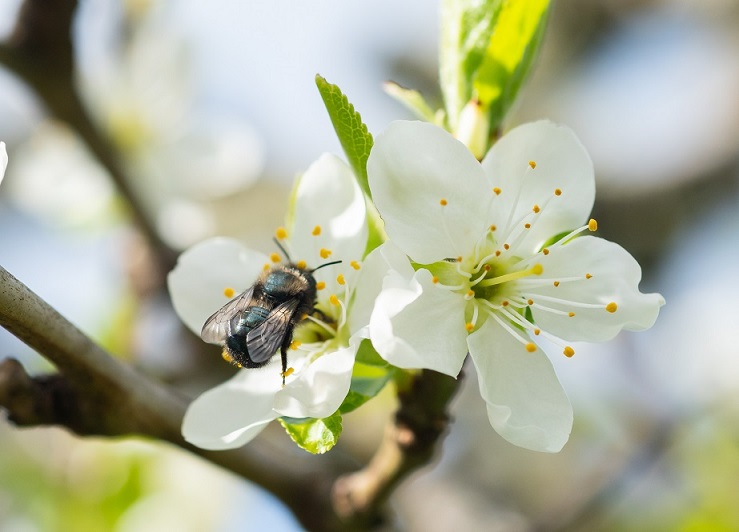 Biodiversity underpins all food production and strengthens agricultural resilience to shocks and stresses that can lead to crop failure. But many of species of plants, animals, and microorganisms, that make up the Earth’s biosphere are disappearing.

The decline in natural plant and animal species poses a severe threat to the world’s capacity to produce food for a growing population. And there is mounting evidence that global food production is itself a contributory factor to the continuing loss of biodiversity.

In the first-ever global study into the state of biodiversity that underpins our food systems, the Food and Agriculture Organization of the United Nations (FAO) points to “ever-growing challenges” facing food and agriculture, as the Earth’s natural eco systems and supply chains that underpin food production deteriorate or disappear completely.

“Less biodiversity means that plants and animals are more vulnerable to pests and diseases,” says José Graziano da Silva, Director-General of the UN FAO. “Compounded by our reliance on fewer and fewer species to feed ourselves, the increasing loss of biodiversity for food and agriculture puts food security and nutrition at risk.”

The report, The State of the World’s Biodiversity for Food and Agriculture, highlights decreasing plant diversity in farmers’ fields, the risk of extinction of livestock breeds and the continuing rise of overfished fish stocks as key areas of concern. It says that over the past two decades, approximately 20% of the Earth’s vegetated surface has persistently declined in productivity.

Biodiversity for food and agriculture

Biodiversity is essential to maintaining natural ecosystem services that sustain world production of food, fibre, fuel and fodder. It is also one of the earth’s primary regulators, allowing adaptation to changing environmental conditions.

Biodiversity for food and agriculture (BFA) is a subset of biodiversity that contributes to food production. It includes domesticated plants (crops), animals (livestock), aquaculture systems (fish farms) and forestry (timber) and other essentials such as cotton for clothing, materials for biofuels and plants for medicines.

BFA depends on the wilder relatives of domesticated plant and animal species and the vast range of microorganisms that purify water and air, fertilise soils, pollinate plants and fight crop and livestock diseases.

Biodiversity is as essential for BFA as BFA is to food production and security. Yet the global transition to more intensive agricultural and aquatic food production systems is disrupting the ecosystems on which BFA depends.

Of some 6000 plant species cultivated for food world-wide, fewer than 200 contribute substantially to global food output, and just 9 plant species, including sugar cane, maize, wheat and rice, account for two-thirds of the world’s total crop production.

There are around 7700 local breeds of livestock reported globally, but only about 40 animal species are used in livestock production, with just a handful providing the vast majority of meat, milk and eggs that we all consume.

Around one third of all world fish stocks are currently being over-fished and more than half have reached their sustainable limit, threatening marine resources worldwide. Aquaculture is one of the fastest growing animal food production sectors, but fish-farming systems often use non-native fish species, displacing indigenous species and harming biodiversity, on which many local communities depend.

According to the FAO, 75% of the world's food is generated from only 12 plant and 5 animal species. In all cases, over-reliance on a small number of crops and species means food supplies are more vulnerable to pests and parasites, disease and climate change.

The FAO report points to historic examples, such as the famine in Ireland in the 1840s caused by potato blight, which led to over 1 million deaths, and the extensive loss of cereal crops in the USA, such as the Dust Bowl that hit the Midwest in the 1930s, affecting the entire US economy.

Analysis of UN country reports (over 90 countries contributed to the UN study), indicate that BFA is affected by a variety of pressures at different levels, including global trends such as climate change, international markets, demographics and population growth.

Farming practices such as overexploitation of natural resources, overharvesting (crops and fish), and overuse of artificial fertilisers, pesticides and insecticides put more immediate pressure on land-use and water supplies, leading to higher levels of pollution and the loss of those natural ecosystem services that underpin BFA.

Changes in land use and water management are the drivers cited by most countries as having significant negative effects on ecosystem services that support food production. This is particularly the case with intensive farming, where one or two species are planted in uniform monocultures patterns to optimise productivity but which disrupt natural regulation mechanisms.

Soil ecosystems, which provide the medium for most agricultural crops, are under threat from soil erosion, organic carbon decline, nutrient imbalance and a loss of soil invertebrates and micro-organisms that support plant growth, regulate water flows and store carbon.

An increasing number of emerging infectious diseases in animals, plants and marine life have been reported over recent decades, linked to rapid habitat changes caused in part by intensive agriculture and aquaculture systems.

A third of global crop production is lost annually to insect and plant diseases that can spread to multiple countries. But the damage doesn’t stop there — over the past decade, more than 70% of emerging diseases affecting humans originated from livestock and wildlife. More animals are being treated with antibiotics to stop the spread of disease but higher use of antimicrobials in animals increases drug resistance just like it does in humans, with the added risk that drug-resistant strains can be passed to humans more generally when they prepare or eat the meat.

The UN study reports that 24% of nearly 4000 wild food species — mainly plants, fish and mammals — are decreasing in numbers, and the proportion of wild foods in decline is likely to be even greater as the health of more than half of the reported wild food species is unknown.

Many associated species are also under severe threat, including birds, bats and insects that help control pests and diseases and sustain soil biodiversity. Wild pollinators, such as bees, wasps, moths, butterflies, flies and beetles, on which around three-quarters of all food crops depend are also in decline.

Land clearances to support monocultural crops on larger fields means less traditional features such as hedgerows, set-aside land and wildflower rich grassland, which results in less of the food and nesting resources for wildlife and instead of continuity of natural habitats, industrial farming leaves resource-rich semi-natural habitats isolated.

Traditional ecological knowledge (TEK), the relationship between indigenous peoples and the natural environment, has helped to maintain BFA at a rural level. But traditional farming lifestyles and local knowledge about the ecosystems that support them are under threat from the spread of urbanisation and the industrialisation of agriculture, forcing local communities to become increasingly dependent on homogenous food crops over which they have little influence.

Agriculture contributes to climate change and is affected by it. Every stage in the food production cycle — from preparing, growing and harvesting, through to production, storage, processing, packaging, transporting and cooking — releases greenhouse gases into the atmosphere. Methane produced by livestock during digestion has received a lot of media coverage recently, while nitrous oxide emissions from mineral nitrogen fertilisers is also a problem.

Planet Earth's oceans, forests and other land-based ecosystems play a vital role in regulating the climate and soaking up around half the carbon dioxide emitted into the atmosphere by human activities. At the same time the continuing loss of biodiversity through over-exploitation of forests and degradation of ecosystems through widescale monoculture farming limits ecosystems’ ability to provide essential carbon capture.

At an international level, farming is responsible for an estimated 30% of greenhouse gas emissions. In Europe this is around 10%, following regulatory controls on fertilisers and better manure management and farming practices.

Most of the countries that took part in the UN study are beginning to address some of the problems. Many now have regulatory powers to govern agricultural practices and institutional frameworks to conserve and sustain biodiversity — but the UN FAO says these are still inadequate or insufficient.

The ecosystem service for which the largest number of species are reported to be managed is pest and disease regulation, followed by habitat provisioning, soil formation and protection, nutrient cycling and pollination. Farming practices that do not degrade species-rich host communities contribute to reducing the transmission of infectious diseases, a phenomenon known as the “dilution effect”.

Reversing the trends of biodiversity loss

Planting trees and shrubs on marginal land can also benefit crop yields through improved nutrient cycling and fixation, groundwater recharge and the provision of shade for livestock, which in turn can provide manure to fertilise crops and create a natural symbiotic relationship between livestock and crops.

The world needs to produce more food to meet growing demands. Yet more intensive food production is damaging those ecological services that support it, while the unpredictable effects of climate change can disrupt even the best laid plans for food security.

Who gets to produce what and where is also controversial and could become confrontational in the future, as wealthier countries and companies seek to purchase huge swathes of agricultural land in less-developed countries to grow more crops for export, leaving indigenous peoples struggling to cope.

The combined forces of climate change and competition for food resources, coupled with the rise in intensive farming systems requires wholesale transformation of the entire food system into something more sustainable and secure for all.

The FAO report calls on governments and the international community to do more to strengthen enabling frameworks, create incentives and benefit-sharing measures, promote pro-biodiversity initiatives and address the core drivers of biodiversity loss. A key issue for regulators in developed countries will be how to reduce the millions of tonnes of food waste we throw away.

The challenge for farmers and agri-scientists is how to increase food production more sustainably while optimising land use and water management and reducing our dependence on agrochemicals that damage biodiversity.

There is an urgent need to improve collaboration across the food, agriculture and environmental sectors. Retailers will need to develop new purchasing and marketing strategies to support more sustainable farming practices and help stimulate new supply chains and markets for biodiversity-friendly products.

For most of us, the trip to the supermarket and the food on the plate is all we know about and maybe, with the right level of market intervention across the food supply chain, that’s all we need to know.

But, as the report points out, consumers could play a key role in reducing pressures on biodiversity for food and agriculture by, for example, opting for sustainably grown products, buying from farmers’ markets and boycotting foods from unsustainable sources. That’s perhaps something we all need to chew on.