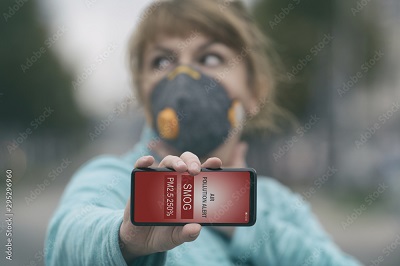 WHO also warned that we now know air pollution is much more dangerous and damaging than previously thought, with implications for everybody.

In fact, the world health body says poor air quality can be linked to the early deaths of some six million people each year around the globe, plus millions of premature births and under-developed babies.

However, WHO also thinks that sustainable solutions for air quality improvements go hand-in-hand with international efforts to tackle the worst impacts of climate change and global warming.

Resilience is not an option

However, while many environmental risks can be tackled with adaptation, there is little room for compromise over the dismal state of the atmosphere around us, both out of doors — and as recent Covid-19 pandemic revelations have shown — indoors where poor ventilation is a problem.

The UK has been pressed for many years to do much more about its national air quality problems; however, it is also home to some impressive leadership examples such as London’s ultra-low emission zone (Ulez) initiative mentioned later.

What has gone wrong?

At the end of the last millennium, it was expected that outstanding air pollution problems — including at exposed roadside locations — would be a history by now. The situation is of course improving, but the problems are getting worse faster. Much more is now also known about bad air’s dangerous chemistry and negative health impacts, which include stunting children’s lung growth.

Outdoor pollution problems are widely recognised. The more recent surprise highlighted by the pandemic is risks of aerosol infections in crowded spaces. This in turn has underlining the need for better building design — critically with effective ventilation features — plus the fitting or retrofitting of more efficient ventilation systems.

This did not happen earlier, researchers now believe, because while poor food, drinking water and sanitation sources are relatively easy to target with practical regulations, the nebulous nature of airborne infections makes tracking down individual sources much harder.

The upshot could be a major rethink. For decades building design has concentrated on keeping people warm — or cool in summer — and saving costly energy. That focus is likely to change.

Worse still, although WHO’s indoor air quality guidelines cover potentially-dangerous chemicals such as benzene and carbon monoxide, to date they do not recommend standards for bacteria and viruses.

A revolution — or at least a controlled paradigm shift

In September, WHO updated its global air quality guidelines for the first time in 16 years. It now includes reduced limits for exposure to extremely small particles known a PM2.5s. If implemented, they could reduce deaths related to PM2.5 by 80%. Safe levels for key pollutants like nitrogen dioxide (NO2) have also been cut severely (https://www.who.int/publications/i/item/9789240034228).

The UK Government has been broadly active here in its plans to cut NO2 (see Air Quality Plan for Nitrogen Dioxide (NO2) in UK (2017): Air Quality Directions).

A particularly important finding as the world tries to decarbonise is that nations most dependent on fossil fuels suffer the worst health impacts which WHO now puts on a par with smoking and bad diets.

The guideline changes mean that the UK’s existing legal limits for the most harmful pollutants are now four times higher than they need to be. Crucially. PM2.5 — small particles that can be breathed deep into the lungs and blood system — are extremely hard to stop.

A broad mix of pollution comes from vehicle exhausts and fossil-fuel-based central heating systems. However, particles can be generated by paints, cleaning fluids and solvents, plus road tyre wear and the abrasion of brake surfaces. Even farm slurries release toxic gases that are a potential hazard.

Another report, published in spring 2021 by the journal Science, was said to be the first of its kind integrating multiple scientific studies to assess the total combined global impact of outdoor and indoor pollution beyond the developed world.

It found that in developing countries most indoor pollution is created by cooking stoves burning coal or wood; for individuals this exposure is a much larger threat than outdoor pollution. Unfortunately, more than 92% of the global population now lives in areas that fall below WHO outdoor limits; some 49% are exposed to high levels of indoor air pollution beyond WHO recommendations.

Now outside the EU, the Government says it has tailored its air quality approach to best tackle emission sources more relevant to the UK. It quotes as an example a 32% fall in nitrogen oxide levels between 2010 and 2019; PM2.5 emissions fell by 11% in the same period it says.

What can companies do?

For businesses keen to tackle air pollution problems on new developments, the advice is to consider air quality issues at the earliest design stage when investments and infrastructure projects are first being discussed. Bolt-on solutions after difficult-to-reverse decisions have been taken are more difficult to implement and usually less effective.

It is also important to bear in mind that statutory obligations are also forcing local authorities to put air quality actions plans in place at notorious pollution hot-spots. Some are also introducing supplementary planning documents as part of a broad tightening of planning policies.

There is also a division in what different authorities expect. Developers are increasingly required to prove their air quality impacts are being offset as “air quality neutral”. However, there is a split in approaches here.

Fork in the road

Some authorities are issuing supplementary planning guidance asking for a financial estimate of the cost burden additional pollution linked to new developments will create. An example is KentAir’s (Air Quality Planning Guidance).

With this approach, advice on the type of mitigation needed is given for development in different sectors, plus how much money needs to be put aside for this. However, London’s route is different.

As a leading world city, the UK capital is proactive with initiatives such as the extension of its ultra-low emission zone (Ulez) that will take more polluting vehicles off the roads and clean the air for millions.

In the two years since it was introduced in 2019, the Ulez has almost halved the capital’s air pollution levels and reduced carbon emissions by some 6%. However, almost all Londoner’s live in areas that do not meet new air quality limits set in September 2021 by WHO.

On the positive side, London is on a path to become a zero-carbon and zero-pollution city; its Air Quality Positive (AQP) guidance (https://www.london.gov.uk/what-we-do/planning/implementing-london-plan/london-plan-guidance/air-quality-positive-aqp-guidance) for developers is as yet still in consultation.

The alternative fork in the road

The cost method assumes a development’s maximum gross impact and can lead to high costs that could result in sound schemes being delayed or stopped. Conversely, the London benchmark approach only takes in emissions from cars, leaving a considerable emissions gap for heavy vehicles with sizeable local effects.

London’s new “air quality positive” guidelines have been in consultation during 2021, but with refererence to the New London Plan are expected to take a holistic approach where all aspects with potential impacts, such as exposure levels and urban geography, are considered at the early design stage.

There is evidence that even small increases in exposure to pathogens can lead to more severe mental illnesses — with no safe levels apparent. Similarly, there are increases in depression and anxiety, plus a marked rise in suicides.

Further research (https://aqli.epic.uchicago.edu/) also suggests that air pollution is taking up to six years off the lives of a billion people — adding up to a global total of some 17 billion avoidable lost years.

Microplastics in our homes

A recent concern, based on research by Portsmouth University, is that airborne microplastic particles in homes are a significant risk.

However, Defra says it is working to stop plastics entering the environment and improving the quality of the air we breathe through its Clean Air Strategy (https://deframedia.blog.gov.uk/2021/11/08/defra-response-to-microplastics-coverage/).

Air quality, is an increasing rather than decreasing national and global health and safety issue that recent research from bodies like WHO (the World Health Organization — https://www.who.int/) warn is negatively affecting almost everyone on the planet.

A recent surprise finding from the Covid-19 pandemic is that indoor airborne pollution may be as harmful as that out of doors. The causes may differ. But research shows that a majority of the world’s population is now exposed to one form of air pollution or another.

As a result, millions of lives could be at risk. However, businesses as well as governments have options to respond to global problems, local issues, and their own best interests.

Get expert Navigate-HR updates for free