Desmond Waight summarises the changes that have occurred over the last six years in relation to the emergency response information required on vehicles carrying dangerous goods, how to recognise whether what is being carried is currently acceptable, and also looks into expected future changes.

For many years, and until 1 January 2009, ADR used to require that the consignor of dangerous goods carried in excess of the 1.1.3.6 small loads relaxation limit (eg 333 litres/kg of PG II or 1000 litres/kg of PG III goods) prepare and supply to the carrier transport emergency instructions in writing specific to the goods in question. 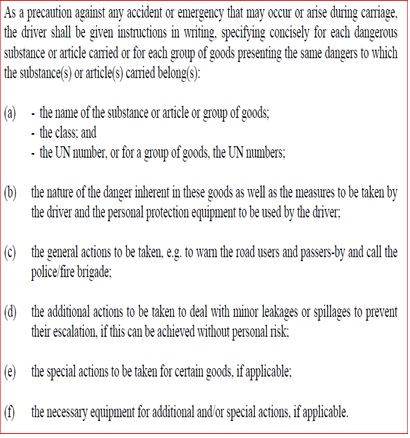 These were often called TREMCARDS, though that term strictly only applied to a specific scheme developed by CEFIC and sold by the UK’s National Chemical Emergency Centre (NCEC).

While perhaps reasonable for dangerous goods carried in tanks and in bulk, the requirements were a “nightmare” for many consignors of packaged dangerous goods, especially where distribution throughout wider Europe was concerned. Producing and providing maybe 10 different transport emergency instructions in writing in maybe as many as 12 or more different languages was a difficult task. Many consignors then had to provide additional language versions because the exact routing of the vehicles and the language needed by the driver(s) involved would not be known with sufficient accuracy in advance. Most of these were unread by the driver and discarded at the end of the journey.

An added complication was that ADR required that:

This meant that, if a consignor had written some specific instructions, the carrier had then to make sure that the drivers concerned were trained accordingly.

Another complication was that ADR required:

This meant that vehicle cabs used to have a suitably identified “NOT APPLICABLE” holder into which non-applicable transport emergency instructions in writing had to be placed, and drivers had to be capable of working out which instructions were applicable and which were not.

While it was often argued that such transport emergency instructions in writing were of great assistance to the emergency services in the country where an incident occurred, over the years — with the development of computerised resources providing similar information based on the UN Number(s) involved, and improved communications between the on scene emergency services and their control — the need for such a system, and its associated costs and complications, began to be questioned.

In ADR 2009 Edition, the old system was replaced and consignors were no longer made responsible for provision of transport emergency instructions (aka TREMCARDs). However, the carrier was made responsible for provision of a new single, standard Instructions in Writing (IiW), to be made available on the vehicle in the language(s) a vehicle crew (not just the driver, if applicable) can “read and understand”.

The standard six month transitional provision was applied to this change.

Accordingly, carriers and drivers need to note the ADR 5.4.3 requirements, which specify that the IiW shall be:

the 1.1.3.6 small load relaxation from the need to carry applicable transport emergency instructions is also far less important, and since the requirement to remove/‘hide’ IiWs that are no longer applicable is removed, the IiW can be kept permanently on the vehicle without any problem.

Since the introduction of the IiW three different versions have been specified in ADR, with a fourth expected from ADR 2017.

In the following, guidance is given on how to spot which version is being shown (especially in the case of Versions 1 and 2) and whether that version is still permitted to be used.

This will not have the EHS mark on the fourth page (diamond with the dead fish and tree) and the coloured elevated temperature mark, as shown below:

This version has not been valid for use since 1 July 2011.

This will have on the fourth page the diamond with the dead fish and tree EHS mark and the coloured elevated temperature mark, but will also have three footnotes under the list of equipment, and will mention standard EN 471 (in relation to the warning vest). 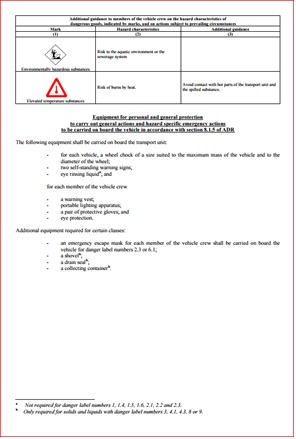 This version became valid from 1 January 2011 and is permitted for use until 30 June 2017, after which use of Version 3 was scheduled to become mandatory.

However, see below concerning the expected Version 4.

While this version will also show on the fourth page the EHS mark and the coloured elevated temperature mark, there will be only two footnotes and no mention of a standard against the warning vest.

Also on the first page (Actions to be taken) it will also mention that e-cigarettes cannot be smoked.

This version became valid from 1 January 2015 and currently has no date after which it will cease to be valid (but see Version 4 below).

The changes for ADR 2017 have been largely agreed and these include a new fourth Version of the IiW, which will be usable from 1 January 2017, and currently is expected to be mandatory for use from 1 July 2017 at the latest.

These include in relation to IiW: 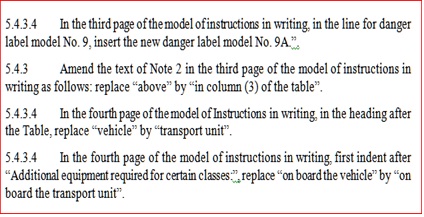 The new label 9A being:

In changes to Chapter 1.6, there is no change made to 1.6.1.35 (which permits Version 2 to be used until 30 June 2017), and no new transitional provision introduced in respect of the continued use of Version 3 after the end of the standard six month transition for the new edition.

However, at its 9 to 13 May WP.15 meeting the experts will have considered a proposal from the Government of Sweden to include in the IiW reference to 8.1.4, fire extinguishers. They argue that this would give a more complete picture of what equipment is required to be carried on board a transport unit. Therefore, at the time of writing, the final Version 4 of the IiW has yet to be confirmed.

This means that from 1 July 2017 only the expected fourth Version of the IiW will be acceptable for use.