Whether you walk for four or five miles to better health via 10,000 steps every day could depend on your individual leg configuration, metabolism, gait and speed, say researchers. Most important is the inspiration to get moving and stay reasonably active for the rest of your life, finds Jon Herbert. 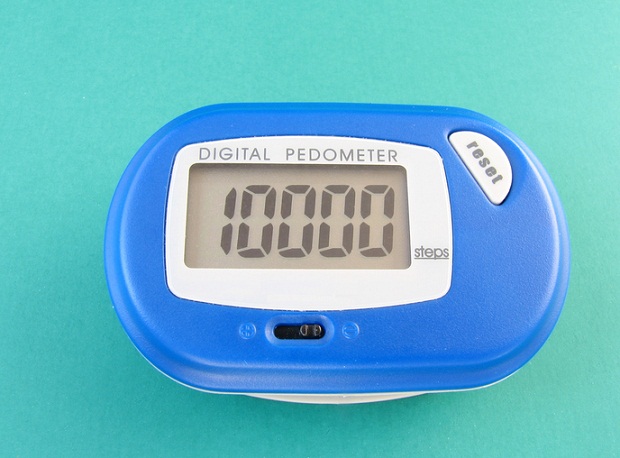 The pedometer “buzz” confirming that you have just taken your 10,000th steps of the day is one of the most satisfying moments of the 24-hour-clock for some people. But what does your electronic fitness tracker actually tell you?

First, it lets you know that by its calculation you have walked a total of some four to five miles (up to eight kilometres) towards a longer and better life — on average. However, experts are questioning what exactly you are achieving; people react differently to brisk walking depending on their individual physiology.

Recent studies also claim that while pedometers in general tend to give accurate heart rate readings, they can be considerably out when it comes to accessing the number of calories burned. Especially if you are using that magic number to justify what you can eat.

But that misses the point, they add. Whatever the precise personal benefits, and whether the nice round figure of 10,000 has a real medical basis, the main message is that setting personal targets to get up and active — and to move at least every 90 minutes — can literally be a life-saver. Sitting still is fast becoming the new smoking.

Why walking is good for most us

Awareness of the importance of personal health is now both a personal matter and, in many cases, a company matter. Businesses around the world are encouraging and sponsoring their employees to take part in organised 10,000 step events — a sector which is becoming big business in itself.

Employers are seeing the value, as part of wider wellbeing programmes, of walking to boost morale, reduce back problems, cut absenteeism and improve productivity. They are increasingly keen to see their staff hit the road or, as one London-based organiser puts it, the frog and toad.

The NHS is unequivocal on the matter. It says that walking can help to build stamina, burn excess calories and give you a healthier heart. Furthermore, walking can be done anywhere, any time — including during the work day if you have family commitments — and in any weather!

Walking is classified as moderate-intense exercise which counts towards the NHS target of 150 minutes of exercise each week. In fact, 10,000 vigorous steps may account for more than two and half hours for some people. Even so, research suggests the more regular activity the better.

Most people walk on average some 3000 to 4000 steps daily. Pedometers, often in the form of a smartphone app, accumulate the many overlooked steps taken around the house, office, shop, workplace, site, school or street.

That may sound like a strange question. However, for people who are not yet active walkers, or suffer joint problems, the advice is to build up your distance gradually. Many local swimming pools hold exercise classes; water can support vulnerable joints until that vital bit of weight is lost.

The best way to start

A pedometer is useful in setting a benchmark of how many steps you take on a normal day. Walking 10,000 may sound like a lot. How can you fit them into an average day?

Again, the NHS offers simple pragmatic tips that include:

If you are reluctant or flagging, try:

How long should you keep on walking?

The simple answer is for the rest of your life!

If that sounds daunting, consider the additional benefits. Preventing weight gain as the years and pounds pile on. Reducing the risk of serious disease, including hearth disease. Eventually, says the NHS, daily walking will become second nature. And it’s free.

Once again, the advice is to edge back into shape gently.

You might also like to choose holidays with plenty of walking opportunities — though some careful family PR may be needed, especially with children. However, good lifetime habits are often best started early. Long beach walks may be more popular.

Although 150 minutes of healthy exercise meets your recommended weekly quote, there is nothing wrong with adding variety, says the NHS. Local sports and fitness centres could be your first port of call. The choice ranges from competitive sports to more sedate activities such as dancing.

Nuffield Health adds that responses to exercise are very specific. One person may lose weight while another doesn’t. A Nuffield study shows that 5% to 10% of the population show no measurable improvement from fitness guidelines.

Fitbit, one of the leading fitness tracker brands, explains that it helps people to live healthier lives by “empowering them with data, inspiration and guidance”.

Nuffield Health also points out that 150 minutes of useful exercise does not have to be done in one go. Five 30 minutes sessions, or even 10 to 15 minute interludes, are just as good.

It’s your lifetime average that counts. Fitness remains the most accurate predictor of mortality. Boosting your aerobic capacity is important. It defines how quickly you will die.

The British Heart Foundation says you should walk as if you are on your way to an important meeting — just slightly out of breath.

While the world market for personal fitness devices is projected to exceed 100 million by 2019, the genesis of the concept has been questioned. The original idea is attributed to the Tokyo Olympic Games of 1964. In Japan, the rage for personal pedometers began more than half a century ago.

The advantage of 10,000 steps is that it has more cache than, say, 7000 steps as a target. But not all steps are the same, say researchers at Loughborough University.

A long-legged person is likely to find 10,000 steps less onerous than a short person. Crucially, peoples’ individual strides and gaits differ markedly. There is question too about how well some devices count steps accurately; ankle-fitted devices are the most reliable, say the researchers.

The principle of diminishing returns is also at work, in as much that a chronically unfit person walking 5000 to 10,000 steps daily is likely to see a greater change in their fitness.

Joggers already running several times a week are less likely to see further gains of any magnitude from walking too, it is suggested.

But that is to overlook the considerable physiological bonus that a personal pedometer brings in providing a clear baseline, target, monitoring, plus the virtuous feeling from being told that your daily ordeal, or pleasant chore, is over.

The essential message is don’t become obsessed with numbers, avoid sitting still for too long… and don’t be tempted to lounge on the sofa at home rewarding yourself with copious amounts of chocolate once you reach your daily goal.