You have almost certainly been “nudged” at some point in your life to do something, but you probably didn’t even realise it. Brian Bunning considers how nudge techniques can positively change employees’ engagement with health and safety. 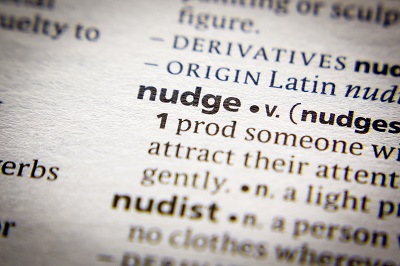 The ability to make decisions quickly and efficiently has been advantageous for human existence, and so has become a highly developed process. However, when decisions are made automatically and/or emotionally rather than logically, the decisions can be irrational, incorrect or unsafe.

Some decisions have life-changing consequences, such as going to university or accepting a job, but most decisions are routine and made without thinking. This is particularly true in familiar environments such as work, where people make decisions affecting their health and safety all the time.

Why do people behave in an unsafe way?

The vast majority of our behaviour is automatic, it is not conscious. This allows us to process multiple tasks simultaneously with little effort.

Some of our automatic behaviour is conditioned by external sources over time and it is difficult to change these quickly. A well-known experiment in conditioning is that of Pavlov’s dog. Pavlov rang a bell every time he fed his dog; after repeating this process for a period of time the dog would salivate simply at the ring of the bell.

Another influence on our behaviour and actions is conformity. Some experts believe that conforming to group behaviour in one way or another has been a necessary survival instinct and that the tendency to conform may, to a certain extent, be “hard-wired” or genetically inherited.

When lots of people conform to a false but perceived acceptable unsafe behaviour, the group “fantasy” can in fact produce real unsafe norms. These behaviours could include:

The pull to conformity is immensely powerful. It is unlikely the fashion industry or heavily branded merchandise would exist were it not for the human urge to conform.

What is a nudge technique?

Nudging, put simply, is coaxing or gently encouraging someone to do something. Nudge techniques can be considered a means to alter peoples’ decision-making towards positive outcomes. Care must be taken as negative nudges, although not necessarily intentional, can adversely affect behaviour, too.

We have all probably been nudged without even knowing it. Most people will have seen a sign on the motorway saying “tiredness kills, take a break”. This simple nudge encourages people to think in a safe way and then act on it by pulling over for a break. Another example “take your litter home, other people do” taps in to our urge to conform, we are being told that the norm is to take the litter home and therefore we are more likely to take heed.

Direct instruction and enforcement of required behaviours and actions can be confrontational and may provoke resistance in certain types of people. These methods also require mindful effort from those being instructed to actually change their behaviour.

The use of nudges is a softer approach, encouraging people to make the right decision for themselves. The aim is to get people to want to behave safely because it is the norm and help them in making the right choices by using nudges.

There are many techniques to nudge your employees to behave in the safest manner. These nudges do not need to be huge “set pieces” and often the simplest ideas can make the biggest differences.

Changing the positioning of certain items will make employees engage with them more (or less) easily, we already know it is good practice to have fire alarm call points at all final exit doors but what about other positioning nudges?

If you focus on the negative aspects of health and safety rather than the positives, it will affect the way people feel about it. It is important to use your words and other means of communication very carefully to increase the attractiveness of the positive behaviour.

An extension to styling communication is giving feedback and prompting feedback from employees. This feedback is not simply a “well done” after a task and doesn’t necessarily need to be from leaders -- it should be embedded throughout all processes and styled accordingly.

It is important when giving feedback to prompt when necessary. Sometimes the employee may need a nudge in the right direction.

Simple feedback nudges can include:

Conformity and “following the herd”

The pull of conformity into unsafe behaviours has already been considered, but this can also be used to the nudger’s benefit. If you can nudge the behaviour of one or two influential people in a group then this will in turn, begin to nudge others. This can create a ripple effect.

Applying the techniques above will help you on your way to nudging your employees to safer decisions. Where the techniques involve human interaction it is important that the nudger understands how to lead effectively.

Employees are less likely to be inclined to respond positively to nudges from leaders if they do not like or respect that person. Similarly if the nudger sets a bad example, especially if they are influential, the results could be detrimental to the overall process.