While 16 June 2021 may have passed with little fanfare, it hosted an event that represents an important shift towards sustainable practices. The event in question was World Refill Day, a public awareness campaign intended to reduce plastic pollution and waste. Caroline and Tim Hand explain refill schemes and how your business, large or small, can participate. 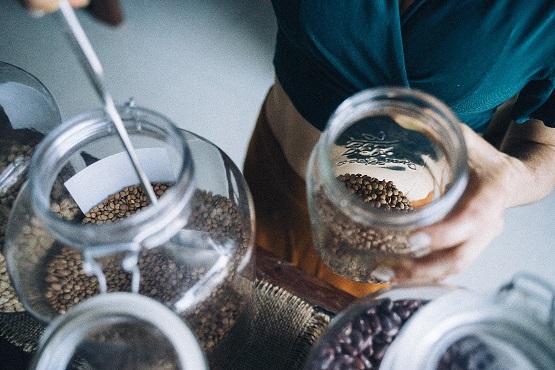 Given that recent analysis indicates that over 50 billion single-use beverage containers are incinerated, sent to landfill, or become litter in Europe every year, the promotion of reusable containers represents a key front in the war against waste. Even a 10% increase in the market share of refillable containers could reduce the number of wasted beverage containers by 11 billion! Reuse is far more eco-friendly than recycling, which requires more resources and energy. Furthermore, many of the waste products that are supposedly “recycled” are simply shipped abroad to cause pollution elsewhere.

Not a hygiene hazard!

Unfortunately, a promising trend towards refills among a variety of companies, including Starbucks and The Body Shop, was somewhat stymied by fears that refill practices could spread Covid-19, which caused a reversion to single-use plastics. However, over 120 health experts have stated that reusable containers do not increase the possibility of virus transmission, provided that basic hygiene (such as surface cleaning and handwashing) is followed. Products in single-use packaging may have also been touched by browsing customers, which undermines the idea that they are more hygienic than packaging-free products.

Some companies have devised imaginative ways of ensuring safe refills, such as Boston Tea Party’s “Contactless Coffee” method. If this method is carefully followed, the barista never even touches the customer’s reusable cup, and a two-meter distance is maintained throughout. Given that most of the UK’s coffee shops are now accepting reusable cups again, it’s fair to say that public health concerns linked to refills have been satisfactorily addressed.

Numerous businesses have implemented refill schemes. One of the most significant is TerraCycle, which has mustered considerable support for its innovative Loop platform. Loop enables customers to order products such as food and toiletries online in reusable packaging, which is then refilled by consumer goods brands in partnership with the scheme. The brands retain ownership of the packaging, which is cleaned after each use and recycled at the end of its life by TerraCycle. Notable brands have already partnered with TerraCycle to support Loop, such as Sky and Colgate Palmolive, and the initiative is intended to expand further across the globe following launches in the US, France, the UK and Canada.

Refill schemes can easily be applied in supermarkets. In 2019, Waitrose began the trial of “Waitrose Unpacked”at its Botley Road store in Oxford. Over 200 products were removed from their packaging, including coffee, pasta and laundry detergent, and customers were encouraged to bring their own reusable containers. « Unpacked”proved extremely popular and was expanded to other stores before the initial trial concluded. In terms of environmental impact, it reduced single-use packaging by 98%, representing a significant triumph.

M&S also trialled a refill scheme which offered shoppers at its Hedge End store in Southampton 44 own-brand products without packaging, at the same or lower prices than their pre-packaged counterparts. The M&S trial was another success story, with over 2600 kg of loose product sold over three months and 25 of the 44 lines outselling the packaged alternatives. M&S have now extended the “Fill Your Own” scheme to more than 10 stores, as well as introducing a 25p discount for customers who bring reusable containers to its Market Place counters for food-to-go.

The credibility of refill schemes is reinforced by the fact that massive global corporations are showing interest in them. Unilever, an initial brand signatory for Loop, is launching trials across the UK, which will enable shoppers to select reusable and returnable stainless steel bottles, pre-filled with familiar brands such as Radox, Alberto Balsam and Persil. Feedback from Unilever’s trials at Asda’s sustainability store in Leeds (its largest trials in Europe) indicated that 94% of UK consumers are more likely to invest in refills than buy new products, which once again clearly demonstrates the popular demand for such initiatives.

However, the potential of refill schemes isn’t confined to larger businesses. Smaller companies have also embraced refill models. One of these is Splosh, a cleaning product company based in Wales. Splosh’s customers initially purchase a “starter box” containing a variety of bottles. Each bottle contains a sachet of concentrated liquid, which can be combined with tap water to create cleaning products. Once the bottle has been emptied, customers can order refill sachets in the post, enabling them to repeatedly reuse the bottles. Furthermore, the film pouch that holds the fluid is dissolvable, and even improves the product by adding viscosity and a mild cleaning action.

Another company that’s tackling the issue of unnecessary waste in the cleaning product sector is Replenish, which has developed a universal “packaging platform” consisting of a reusable bottle attached to a concentrate refill pod. In addition to cleaning products, Replenish’s system can be applied to the majority of packaged liquid goods, including beverages. As well as selling their own products, Replenish also work to incorporate their refill system to the products of collaborating brands. Given that the majority of cleaning products only contain around 10% of active ingredient, with the remaining 90% made up of water, there is a clear need to reduce the amount of single-use plastic involved in the packaging and shipping of these products, since water is readily available at home! This need to reduce unnecessary waste makes the efforts of companies like Splosh and Replenish all the more commendable.

Download the Refill app and register as a refill station

There are plenty of ways that businesses can participate in the move towards refills. For instance, employees could be encouraged to use the free Refill app, available on the App Store and Google Play, which guides users to places where refills can be obtained. The app was launched by City to Sea, a community interest group dedicated to preventing marine plastic pollution, and can be used for a variety of refill purposes, ranging from filling your water bottle to finding plastic-free groceries.

Any business offering refills can register as a refill station on the app, including cafes, airports and even libraries. For instance, Ecover, an eco-cleaning brand, formed a partnership with City to Sea, and added over 700 locations in the UK alone where customers can obtain refills for cleaning products. The app has already encountered considerable success, having been downloaded over 350,000 times, and over 100 million pieces of plastic have been saved since the campaign’s launch.

Use refillable bottles in everyday life

Using the Refill app isn’t the only way that businesses can promote refills. Companies seeking to take a stand against plastic pollution could obtain cleaning products in refillable bottles, and set up water fountains for employees to dissuade them from buying single-use bottles.

Even more can be done by restaurants and takeaway food shops, which could engage in practices such as incentivising the use of refillable cups, offering water in glass jugs instead of bottles, providing reusable cutlery, and buying ingredients from stores offering unpackaged foods.

An increase in refill practices would have immensely beneficial results for the environment, and businesses have a large role to play if this is to be brought about. With polling commissioned for World Refill Day by City to Sea and Friends of the Earth indicating that 81% of Britons want the UK Government to make refillable products more widely available and easier to buy, the rewards for businesses that choose to embrace a better future and adopt these practices could be considerable.