A small landlocked country in the Himalayas with an ancient culture, Nepal is familiar terrain for British adventurers, though less so for UK businesses. 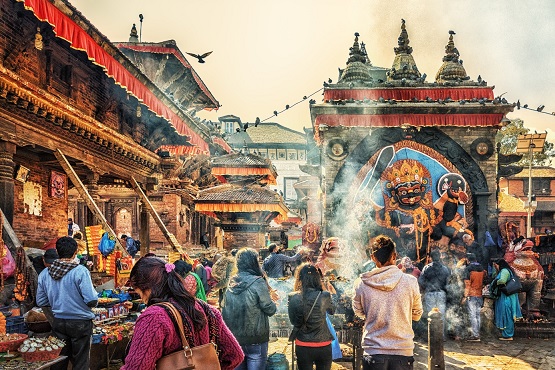 At the top of the world

The Federal Democratic Republic of Nepal — home to Everest, the Himalayas and its famed capital Kathmandu — is still the stuff of legend in the eyes of most Britons.

A country of over 29 million people, it is best known for its trekking territory and as the launchpad for countless climbing adventures through the years.

That includes the famed British-led expedition that resulted in Sir Edmund Hillary (who was, in fact, a New Zealander) and Nepalese Sherpa mountaineer Tenzing Norgay becoming the first climbers to reach the summit of Mount Everest in 1953.

While thousands from all over the world have reached the summit since then, the achievement creates a powerful, historical bond between two nations separated thousands of miles apart.

Indeed, the UK and Nepal are long-time partners that have enjoyed diplomatic relations for over 200 years — by far the longest formal relationship Nepal has with any country.

Bordered to the south by India and China to the north, Nepal sits between two of the world’s great rising powers.

Also on Nepal’s eastern flank is the tiny and even more secretive kingdom of Bhutan.

This comparative isolation has, however, seriously impacted Nepal’s growth through the decades — there is a clear gap between Nepal’s lofty elevation and its lack of development.

While 2019 real GDP growth was tipped to come in at a healthy 7.1 per cent, according to the International Monetary Fund (IMF), most Nepalese citizens remain poor, dependent on aid and tourism.

The country is ranked as one of the world’s poorest countries, and the second-poorest in Asia, after only Afghanistan.

Indeed, despite its illustrious mountain history, Nepal’s opening up to the world is a comparatively recent thing, with the kingdom largely closed to outsiders until the 1950s.

Going back further in the history books, the UK’s relationship with Nepal was also less harmonious, even resulting in war for a period during the era of British rule over India.

The two sides eventually signed the Nepal-Britain Treaty of 1923, in recognition of Nepal as an independent and sovereign state.

In the modern era, Nepalese Gurkhas are now recruited into the British Army, fighting side by side in conflicts such as the Falklands, underlining the closeness of the relationship today.

Almost a century after gaining independence, Nepal continues to find its way in a changing world, dwarfed on either side by the two emerging giants of India and China.

Unfortunately, political infighting has not aided economic development efforts, nor the landmark abolition of the monarchy a decade ago; key exports today are made up of mainly simple goods such as carpets, textiles, tea and beverages.

While Nepal now boasts a multi-party parliamentary system, it has not been an easy transition, in the wake of a decade-long Maoist insurgency and the abolition of its monarchy in 2008, ending 240 years as a kingdom.

The decade since that major shift has brought additional challenges, compounded by the devastating earthquake of 2015, which resulted in the deaths of thousands of people (including locals and tourists); it left many isolated communities stranded in the challenging mountainous landscape.

Billions of dollars were pledged from all over the world for the reconstruction effort, a measure of the generally warm attitude to the country with Nepal enjoying goodwill from the rest of the world, with its ancient culture and the iconic Himalayas as a backdrop.

It has a natural affinity with India, of course, with the vast majority of the Nepalese population, about 81 per cent, identifying as Hindu (there are also significant Buddhist and Muslim populations as well), though the relationship is not always a smooth one.

The 43-mile pipeline, funded by India, will enable Nepal to import fuel at a lower cost; oil imports were previously carried on tankers via road from India into the landlocked country.

It’s a welcome boost for Nepal’s economy — which imports all its oil from India — and a response by New Delhi to counter increasing advances from China.

The two leaders discussed a range of projects including one to expand a railway link between Tibet and Nepal, as part of China’s so-called Belt and Road initiative.

Understandably, Nepal is keen to nurture relations with both sides, and sees the rail link as an alternative to its dependence on India.

That makes sense given that a prolonged blockade of its border crossings with India in 2015 and 2016 left Nepal short of fuel and medicine for months.

Overall, India accounts for almost two-thirds of Nepal’s trade, as well as being the sole source of its fuel supply.

With its strong historical links, and its huge investments in India, the UK is also keen to expand trade ties with Nepal.

The country is already firmly on the map for tourists, with the number of visitors to Nepal from the UK rising to over 60,000 each year.

In June 2019, during a visit by the Nepalese Prime Minister to London, the two sides signed a communique to boost business links, with the aim of agreeing a Double Taxation Avoidance Agreement during 2020.

But there is a long way to go, given the scale of Nepal’s underdevelopment.

“Both sides acknowledged Nepal’s efforts to graduate from least developed country status at an early date and achieve the sustainable development goals by 2030,” the joint communique read.

The UK is already Nepal’s largest bilateral donor, with the Department for International Development active own multiple fronts, which provides a platform for business moving forward.

The Nepalese embassy in London identifies a host of investment areas including tourism, hydropower, agriculture and also outsourcing opportunities, given the country’s low-cost workforce.

Its location between India and China makes it physically and politically significant for the relationship between these two Asian superpowers.

It also puts Nepal in a position to sell clean energy from hydropower to address shortages in India; the scope for hydro energy is huge given the mountainous terrain.

A new British ambassador, Nicola Pollitt, was appointed to take the reins in Kathmandu in November 2019 and lead the relationship into the future.

Businesses on both sides are also supported by an active Britain Nepal Chamber of Commerce.

There are signs of progress that should give encouragement to would-be British investors.

The 216 megawatt (MW) plant on the Upper Trishuli river in Nepal will sell power to the state-owned Nepal Electricity Authority when it comes on stream in 2024.

Nepal will also seek to nurture ties with its close neighbours to expand infrastructure.

According to the Economist Intelligence Unit, balancing ties with both China and India will be “crucial to Nepal’s foreign policy” and most likely bring with it dividends in terms of new infrastructure and financial support.

The Asian Development Bank (ADB) is another agency that has long supported Nepal’s economy.

Another is improving airport capacity with the Gautam Buddha Airport, serving Siddharthanagar.

The ADB says “notable socioeconomic progress” has been made in recent years with increased literacy rates, reduced poverty and greater social inclusion.

Under the new strategy, it expects to lend up to US$600 million during the first two years, to 2022.

Despite the many challenges Nepal faces, what is undeniable is the courage and resilience of its people, from the Sherpas in the mountains to the fearsome Gurkhas.

This can-do spirit is embodied by the likes of climber, Nirmal Purja, who scaled the world’s 14 highest peaks in just six months and six days during 2019; the previous record for this feat was 10 years.

Purja has already become a legend among his climbing brethren the world over, but especially so in his native Nepal.

After completing his final summit, he told reporters: “I want to inspire generations to come.”