Dr Victoria Hurth looks at the unsustainability of our current soil use and the urgent need for this to be addressed. 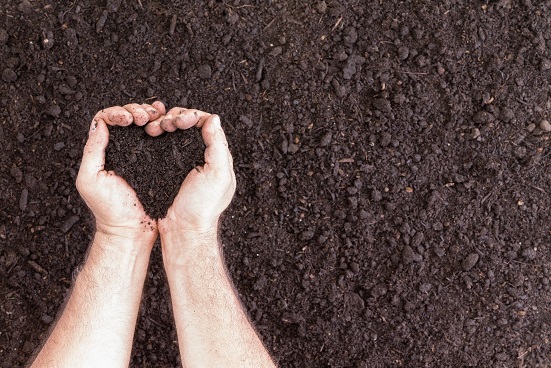 Two years ago, Michael Gove announced that the UK is 30–40 years away from eradication of soil fertility. Being a concerned academic about the little understood issue of soils for many years, I was shocked that suddenly a mainstream politician got this. At the same time, what Gove was talking about is not news. We have known for a long time that how we use our soils is unsustainable. In fact, the United Nations Convention to Combat Desertification (UNCCD) was created back in 1994 and remains the “sole legally binding international agreement linking environment and development to sustainable land management”. We know that 52% of the land used for agriculture is moderately or severely affected by soil degradation. We know that it takes 500–1000 years for an inch of top soil to be created naturally and yet we lose it 30 times faster than natural replenishment rate: 12 million hectares of quality soils lost each year (23 hectares per minute) — enough to grow 20 million tons of grain. We also know that, as with most other environmental issues, the poor suffer most — 74% of the poor are directly affected by land degradation globally.

However, in our focus on the grave threats of climate change, it seems we have forgotten the serious issue of soil health. Despite the 1994 UN Convention, it was only in 2015 that the world’s first ever “Status of the World”s Soil Resources’ was compiled by the UN FAO.

Its core conclusion: “Soils are fundamental to life on Earth but human pressures on soil resources are reaching critical limits… due to the erosion, salinisation, compaction, acidification and chemical pollution of soils. Further loss of productive soils would severely damage food production and food security, amplify food-price volatility, and potentially plunge millions of people into hunger and poverty”.

The reality is that like a stable climate, we humans have taken the fertile soil we found on planet earth for granted and are now nearing end game time. Either we can change or we lose this asset. And this is an asset that means more to our wellbeing than food alone.

Traditionally we have almost exclusively looked at soil from the perspective of food — and this focus has not solved the problems. We now understand that soil also provides a whole range of ecosystem services that support our wellbeing, including the role of soils in the carbon, nitrogen and water cycles and as a home for organisms and genetic resources. These services come from three main aspects of soil: texture, mineralogy, and organic matter.

A key way of understanding how important soils are is by considering nitrogen cycle disruption. This is the second of the “planetary boundaries” that is totally overshot (biodiversity being the other). The Max Planck Institute provides a clear overview of how a steady state of nitrogen that plants can use for billions of years are propped up by finely tuned communities of microorganisms in the soil. As cities grew large soil fertility was strained and imported bird poo was the solution reached. This gave way to synthetic fertilisers from fossil fuels in the 20th Century which have flooded our global system with additional nitrogen that reacts with other natural systems in complex ways that can’t be measured like carbon dioxide can be. This over supply affects water and life in water (eg eutrophication), air quality, climate, biodiversity and soil quality including acidification.

Those who focus on this issue, argue that this is as great a threat to humanity as climate change. Although connected, we will not solve our soil crises if we do not focus on it at the same time as climate (and the dozen or so other major sustainability crises). At the very same time, if we focus on fixing soils as part of the solution to climate change (and vice versa) then we have a chance of finding truly sustainable solutions within the rapidly closing window of opportunity. For example, synthetic fertilisers have reduced the ability of our soils to store carbon and in fact has made them net carbon emitters. If we want to suck some of that carbon out of the atmosphere then restoring soil health is one key way.

Soil is foundational to our long-term wellbeing (sustainability). If we were going to have a suite of measures of resource sustainability then soil health would be a key one. At the same time many well-developed methods for improving this measure exist. Organic agriculture is a key one (declaration: I am a Non-Executive Director of the Soil Association Certification!), along with methods and systems such as permaculture, no-till and no-soil growing such as hydroponics where fish provide the nitrogen naturally and more soil can be left free of agriculture.

To start to prioritise these solutions we need to reconnect humanity with soils. As the FAO Global Soil Report neatly summarised: “We know more about soil than ever before, yet perhaps a smaller percentage of people than at any point in human history would understand the truth of this statement.” Hence, the pressure to ignore soil completely, ignore it until we solve climate, or deal with it as an issue on its own, are strong. Instead we must push back against this and challenge ourselves and decision-makers to do the tough job of solving all these problems together — addressing the root problems. Agriculture is all of our problem and we need to start getting active as stewards of our soil — buying organic and high standard produce and holding companies and government to account for how they are using and protecting our heritage. With Tony Juniper now at the helm of Natural England, perhaps the time has come where we can work in partnership with Government to make the changes needed.